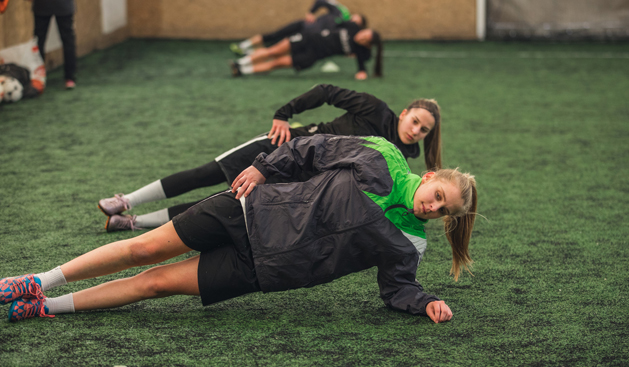 The last thing any athlete or parent wants to hear is that they need a whole year to recover from a serious knee injury. Too often young female athletes suffer from knee injuries that sideline them for a good chunk of time and take them away from the joy of playing their respected sport.

Sadly, female athletes are more prone to knee injuries than their male counterparts. There are multiple reasons for this and they include anatomy, core stability, and conditioning.

So what can young women do? Should they avoid participating in sports or any physical activity to make sure they never get hurt? That sounds pretty extreme and would make for a really dull life.

Instead, they should take the proper steps and attack the areas that they can control; their core muscles, conditioning, and mechanics.

The core consists of all the muscles of the trunk, including the muscles of the hips and lower back. Instead of doing a hundred crunches everyday, female athletes should have a well-balanced approach to improve their core stamina and enhance their core stability, lowering their risk of injury. Different exercises such as side planks, deadbugs, hollow holds and other forms of isometric holds challenging the core to remain still are great to implement. Different rotation/antirotation exercises such as V-Twists or Paloff holds should be considered. Exercises such as a lateral band walks and clamshells will help to target the hips to further aid in stability.  The number of exercises is endless, but the idea of attacking all the actions of the core should always be in mind.

Conditioning is important for all athletes, females included. Athletes should be gradually progressed and their conditioning should meet the demands of their respective sport. If an athlete ran 10 sprints one day, they shouldn’t jump to 20 sprints the next time they train. Increasing to 11 or 12 sprints then slowly building up to 20 would be more gradually progressive and allow the athlete to get better with a much lower risk of injury.

Mechanics and exercise technique should always be important for female athletes, especially when performing explosive athletic movements such as jump squats, Olympic lifts, or box jumps. We’ve all been there, we want to get to the next level box or lift that extra 10 lbs. We forget all about form and just get the exercise done, thinking we really did improve. Instead we should take a step back and evaluate our form. In regards to female athletes, we should be extra mindful of knee valgus. This is when the knee comes toward the midline of the body.  This position puts female athletes at a higher risk of ACL injuries and should be avoided in all exercises.  Working on the core and hip muscles will help athletes be strong enough to align themselves properly in exercises and keep them in a safer position.

Female athletes are athletes. They want to be their best and compete at a high level. None of them want to face a knee injury and be sidelined for a period of time.  So in order to avoid that unfortunate situation all together, they need to take deliberate steps in their core training, conditioning, and mechanics.  With all three of those ideas in mind when training, female athletes should be able to stay healthy and continue to practice and play the sports that they enjoy.