Train Your Way Out of Early Extension

Early extension is an extremely common, yet avoidable faulty swing characteristic.  In fact, 70% of all golfers early extend and 99% of PGA tour players do not.  Quite the correlation for great ball striking, wouldn’t you say?  There’s a good chance early extension is hurting your score card because it significantly increases the risk for a block or hook shot.  It also has potential for causing some harm to the body as it results in rapid, forceful, undesirable spinal movement.

So, what is early extension?

Early Extension occurs when the hips and spine begin to extend or straighten up too early on the backswing and/or downswing.  Golfers who early extend have poor hip rotation and they have a hard time keeping their bodies stable throughout the swing.  When the lower body fails to rotate through impact, it causes the lower half to push forward, causing the golfer to stand up.  Next time you’re on the course, just for kicks, stand behind your buddy as he/she gets ready to tee off. 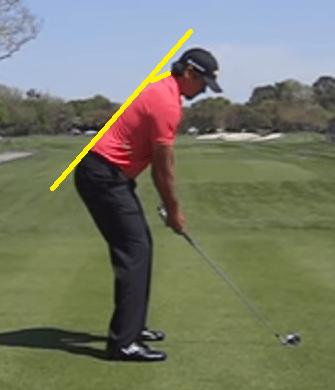 When your buddy gets into his/her ready posture, their hips should be in a flexed position like the photo above.  In a perfect scenario, this degree of hip flexion is maintained throughout the backswing and downswing.  We obviously are not going to keep our hips flexed like this at impact during our drives and long iron shots because that would feel extremely unnatural.  Therefore, it’s important to understand that we do need to get into extension at some point in the swing, it just needs to be timed properly, hence the term EARLY extension. 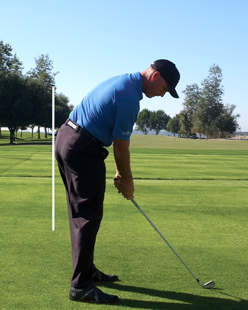 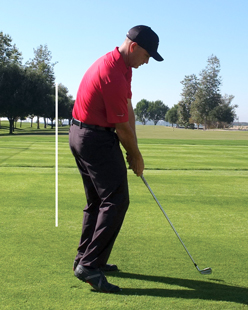 Now look at this golfer extending forward, creating daylight between his rear end and the white line.  This golfer has moved closer to the ball at impact, crowding the area where the arms need to go. 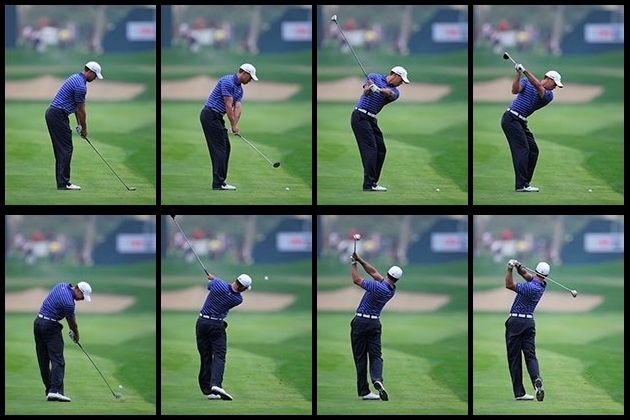 Now look at this photo showing the swing sequence of Tiger Woods.  In the top four photos, hip flexion is maintained all throughout the backswing.  Tiger times it perfectly by not going into extension until impact.

Why is Early Extension an Issue?

When the hips and spine begin to go into extension or straighten up prematurely on the downswing, the upper body compensates by rising to help the golfer maintain balance.  It also causes the lower body to crowd the space where the arms should go on the downswing.  When the golfer finds his/herself closer to the ball at impact than they were address, it’s unpredictable where the club face may be oriented.  This can easily cause a block or hook shot because the hands and arms are desperately attempting to bring the club to the ball.

While some may argue that high-level golf performance is more mental than physical, the physical component is the foundation for success.  Inactive lifestyles cause a laundry list of muscular imbalances, resulting in movement compensations and foreseeable injury patterns.  Tightness is also known to decrease neural drive, impairing the central nervous system’s ability to call a muscle group into action.  A golfer who lives a sedentary lifestyle and early extends on their swing will not be able to fix it with some simple tweaks in technique.  The protocol requires improving mobility, stability, and strength in the joints and surrounding muscle tissues through a variety of movement patterns.

To avoid early extending, several physical characteristics must be developed.  Here are some tests we administer in our mobility screening to help identify faulty movement patterns associated with early extension.

Michael has been a strength coach at Olympia Fitness and Performance for three years. Michael graduated from Rhode Island College where he studied Community Health & Wellness with a concentration in Wellness & Movement studies. After graduating, Mike went on to get his CSCS (certified strength and conditioning specialist) through the NSCA. He is also a Certified Speed and Agility Coach, as well as a TPI certified coach. In his three years as a strength coach, Mike has helped clients from all walks of life improve their fitness levels. He has a strong passion for helping young athletes not just improve their athletic performance, but also helping them build confidence.