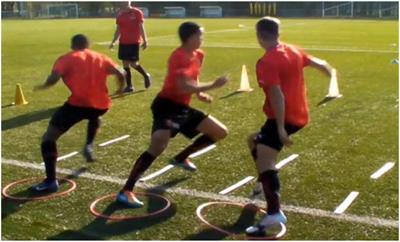 You can play it anywhere with no equipment except for some sort of ball. Whether it’s soccer, futbol, or football, the game is incredible. I know my life, as well as millions of others, has been shaped by it.  From playing in college to playing in the street with friends, soccer can be an extremely physically demanding game. From the repeated sprints, to long runs back to goal, or hard 50-50 challenges for 90+ minutes, top players need to be physically capable. With that in mind, here are 4 key important areas that all top players need to cover:

A lot of players don’t do enough strength training.  No, the aim isn’t to get a soccer player to throw around as much weight as an American football player but strength plays a major role in all aspects of the sport. From helping players stay healthy to having an impact on a player’s ability to run, cut, and jump, building strength will almost always have a positive impact on a player.

Regarding what to do to build strength, most players need just a solid base level that can gradually be progressed in intensity or complexity. Whenever possible, I would try to keep the players completing single leg exercises such as rear foot elevated split squats, lunges, and step ups because they mimic the single leg actions performed in the sport itself. Upper body exercises don’t need to be excessive but they shouldn’t be ignored. Mixing in an even amount of pulling (pull ups and row variations) and pushing (pushups, chest/shoulder presses) exercises with the idea of steadily progressing the exercises should be sufficient.

Plyometrics or jump training is an incredible tool players should be using to become more athletic. Plyometrics can include various jumping, hopping, and bounding. The key to plyometric training is to make sure the movements are done in a powerful yet controlled manner while having plenty of rest between movements so that they are done cleanly. Players should feel fresh going into each set and not gasping for air. Plyometrics can have great effects on a player’s ability to sprint, change direction, and jump as long as the players are keeping both the intensity and quality of movement high.

There’s a reason why Cristiano Ronaldo is constantly seen working on his midsection. Beyond looks, Ronaldo must know how important the core is for his successful career.

Core training should never be neglected because of the role the core has in every aspect of playing. The core’s main goal is to stabilize the spine and act like a platform for the movements of the extremities of the body. The stronger the core, the more stabile the platform, the more powerful movements can smoothly be executed. From sprinting, to jumping, to heading, and shooting, the core is always heavily involved.

Core work should consist of a wide variety of movements such as isometric holds (planks, hollow holds) anti-rotational and rotational exercises (paloff presses, medicine ball v-twists) flexion and extension, (crunches, bird dog holds). Like strength training, these exercises should be slowly progressed and players should always look to improve upon them whether it’s increasing the time of the exercise or completing more reps.

It’s the ultimate separator.  I’ve seen too many players who are great for 30 minutes but in the final stages of the game lack conditioning and then their performance dramatically suffers. Is the player making the same runs they did in the 10th minute of the game when it’s the 85th? Can the player repeatedly get back defensively after they’ve made runs forward? Can they beat the defender and accelerate away throughout the match or only in the beginning? Can the players make that long recovery run to possibly save a goal later in the match? These are the questions players need to ask themselves and adjust their training so that they’re more prepared for 90+ minutes of action.

Soccer is a game of multiple high effort sprints but it’s also a game that can last up to 120 minutes. With both those ideas in mind, players need a blend of aerobic and anaerobic conditioning.  Running shuttle runs that require sprinting and change of direction can aid in anaerobic fitness. Simply completing 20-30y sprints repeated with little rest between reps could also do the trick.

Completing longer duration activities such as mile runs or 20-30 minutes on a bike will target a player’s aerobic fitness. These longer and less intense runs can also serve as a great tool to recover from a hard training session or game.  For more information on aerobic fitness and various ways to improve it, check out my blog post I wrote back in the winter, https://olympiafitnessri.com/the-importance-of-aerobic-fitness-in-soccer/.

Strength and conditioning for soccer players is needed if players want to play at a high level. The physicality of the game only elevates through the high school, college, and professional levels. To meet this physicality, players need to invest into the proper strength and conditioning. Through improving their strength, involving plyometrics, training their core, and improving their conditioning through training, players can get an edge over their counterparts.  With this new strength and athleticism, players will find it easier to play this beautiful game at the highest level possible.